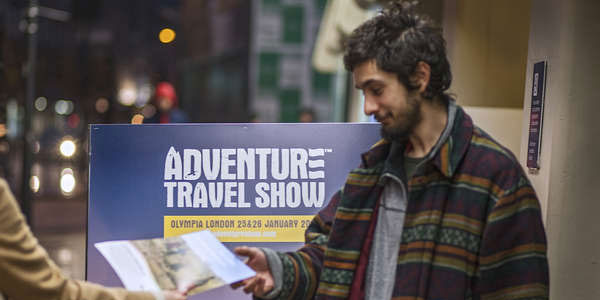 Protestors have targeted Botswana tourism at the Adventure Travel Show in London and the Fitur travel fair in Madrid, to highlight Botswana’s persecution of Africa’s last hunting Bushmen.

Supporters of tribal rights organization Survival International handed hundreds of flyers to visitors and tourism industry professionals, urging them to stay away from Botswana until the Bushmen are allowed to live freely on their ancestral land in the Central Kalahari Game Reserve (CKGR). The Botswana Tourism Organization had stands at both events.

Botswana is using violence, torture and intimidation to stop the Bushmen from hunting and to drive them off their land in the CKGR, while attracting tourists to the country with contrived images of Bushmen hunters.

The most recent victim of such abuse was held at gunpoint and beaten by members of Botswana’s paramilitary police (SSG).

The majority of Bushmen are forced to apply for restrictive entry permits to access the CKGR in a system which has been likened to the hated Pass Laws under apartheid South Africa, and the Bushmen’s British lawyer has been banned from entering the country.

Since Survival launched its tourism boycott in September 2013, nearly 7,000 travellers have pledged not to visit Botswana until the Bushmen are allowed to live freely on their land, and three tourism companies have joined the boycott.

Survival’s Director Stephen Corry said today, ‘Botswana continues to flog luxury tours to the CKGR using the image of ’exotic’ Bushmen wearing skins and the promise of a chance to ‘experience the traditional way of life of Kalahari hunter-gatherers’. In reality, Africa’s last hunting Bushmen are being starved, tortured, beaten and intimidated off their land, and the government is doing everything possible to stamp out that very way of life it uses to sell exclusive holidays. Clearly only those Bushmen that generate income for President Khama’s investments in the tourism industry are allowed the freedom to ‘sleep in grass huts’.’

Travel fairs targeted over Botswana boycott is a post from: Africa in One

Africa in One» EcoNews