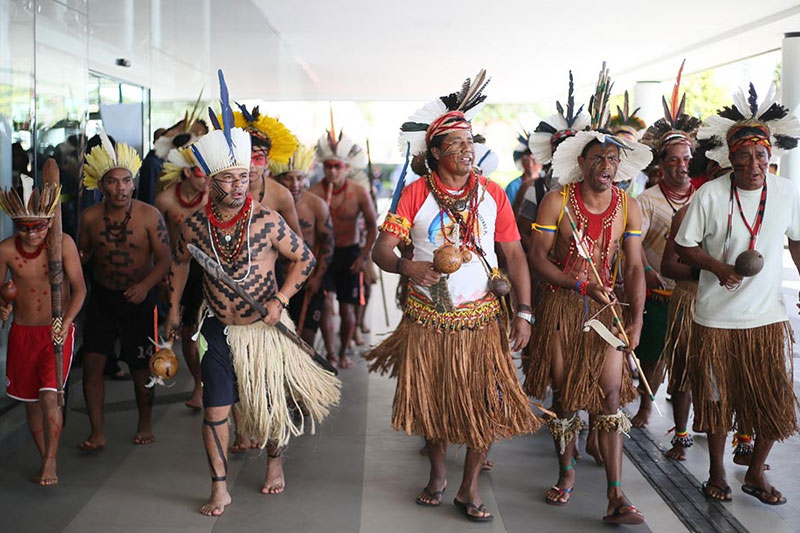 Indigenous protest, Brazil April 2018. “By painting the streets red, we’re showing how much blood has already been shed in the struggle to protect indigenous territories” – Sônia Guajajara, a spokeswoman for APIB (Brazilian indigenous organization).

The land rights of the Xokleng, a tribe that was violently expelled from its territory in the 19th and 20th centuries to make way for European colonists, are now the focus of a landmark court case in Brazil.

The Xokleng were brutally persecuted and evicted by armed militias to make way for European settlers. The Supreme Court hearing into the so-called “Time Limit Trick” could now set the effects of these and subsequent evictions in stone, establishing a precedent which would have far-reaching consequences for indigenous peoples in Brazil.

Other Xokleng communities are also fighting to recover some of their territory. The Konglui Xokleng in Rio Grande do Sul state have launched a ‘retomada’ (reoccupation) of their land, which is now occupied by a national park. The government wants to make it an ‘ecotourism’ destination. © Iami Gerbase/Survival

The case centers around the demarcation of the “Ibirama La Klãnõ” Indigenous Territory in the state of Santa Catarina in southern Brazil. If they win, the Xokleng would be able to return to a significant part of their ancestral territory.

However, the official demarcation of the territory has been suspended following a lawsuit filed by non-indigenous residents and a logging company operating in the area. They argue that on October 5, 1988 – the date the Brazilian Constitution was signed – the Xokleng only lived in limited parts of the territory and therefore have no right to most of their original land. If this argument succeeds, it would legitimize centuries of evictions experienced by indigenous peoples throughout Brazil.

The Brazilian government encouraged Europeans to settle on indigenous land, and allocated them large parts of the Xokleng and other indigenous territories at the beginning of the 20th century. It also financed a so-called “Indian-hunting militia”, which accelerated the colonial land grab. This militia specialized in the extermination of indigenous peoples and hunted down the Xokleng.

“The Redskins are interfering with colonization: this interference must be eliminated, and as quickly and thoroughly as possible,” German colonists demanded at the time.

The Xokleng territory was continuously reduced over several decades. In the 1970s, a dam was built in the small part that remained.

Map of the current (Ibirama) and planned (Ibirama La Klãnõ) indigenous territory. The expansion of the territory is the cause of the legal dispute. © Marian Ruth Heineberg/Natalia Hanazaki based on data from FUNAI/IBGE/MMA.

If Brazil’s Supreme Court votes in favor of the “Time Limit Trick”, it would have devastating consequences for many other indigenous peoples, and their chances of reclaiming their ancestral territories. It could enable the theft of land that is rightfully owned by hundreds of thousands of tribal and indigenous people. The validity of existing indigenous territories could then also come into question.

Brasílio Priprá, a prominent Xokleng leader, said: “If we didn’t live in a certain part of the territory in 1988, it doesn’t mean it was “no man’s land” or that we didn’t want to be there. The “Time Limit Trick” reinforces the historical violence that continues to leave its mark today.”

Indigenous organizations and their allies, including Survival, began raising fears about the “Time Limit Trick” in 2017, calling it unlawful because it violates the current Brazilian Constitution and international law, which clearly states that indigenous peoples have the right to their ancestral lands.

President Bolsonaro is turning back the clock on indigenous rights, attempting to: erase their right to self-determination; sell off their territories to logging and mining companies; and ‘assimilate’ them against their will. Survival International and tribal peoples are fighting side by side to stop Brazil’s genocide.

Fiona Watson of Survival International said today: “The history of the Xokleng shows just how absurd the “Time Limit Trick” is: Indigenous peoples have been evicted from their lands, hunted down and murdered in Brazil for centuries. Those who demand that in order to have the right to their land now, indigenous lands had to have been inhabited by indigenous communities on October 5, 1988 – after the end of the military dictatorship – are denying this history and perpetuating the genocide in the 21st century.”