You are here: Home / News / Uncontacted Indians under Pressure 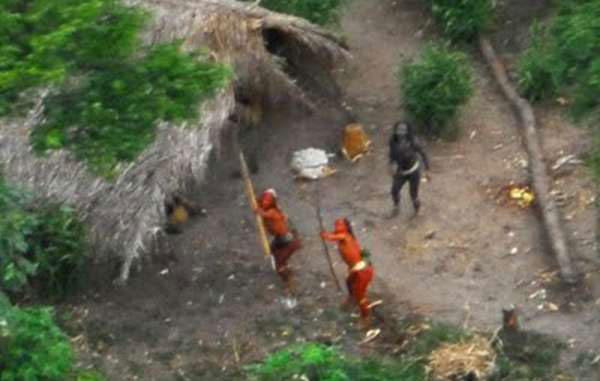 Brazilian officials have warned that uncontacted Indians face imminent “tragedy” and “death” after a dramatic increase in the number of sightings in the Amazon rainforest near the Peru border.

Experts believe that the Indians have fled over the border from Peru in a bid to escape waves of illegal loggers invading their territory. They are now entering the territory of other isolated Indian groups already living on the Brazil side – and some settled communities.

Ashaninka Indians in Acre state, Brazil, for example, say they recently encountered dozens of uncontacted Indians close to their community, and recent government investigations have revealed more frequent sightings of footprints, temporary camps and food remains left behind by the Indians.

These incidents are raising fears of violent clashes between the various groups, and decimation by contagious diseases to which the uncontacted Indians have no immunity.

José Carlos Meirelles, who monitored this region for the Brazilian government’s Indian Affairs Department FUNAI for over 20 years, said, “Something serious must have happened. It is not normal for such a large group of uncontacted Indians to approach in this way. This is a completely new and worrying situation and we currently do not know what has caused it.”

The Indians were spotted in the same region where uncontacted Indians were famously photographed and filmed from the air four years ago. But the area lacks protection since a government post was abandoned after it was overrun by drug smugglers and illegal loggers in 2011.

The uncontacted Indians are some of the most vulnerable people on the planet. Although they appeared healthy, they have no immunity to common diseases such as flu and measles which have wiped out entire tribes in the past.

FUNAI investigated the Ashaninka’s alarming reports last week. It warned that “contact is imminent” and demanded that health teams must be sent to the area as a matter of urgency or “they risk catching diseases… which could kill them all.”

Prominent Amazon Indian leader Raoni Metuktire, who has led the fight for the Kayapó tribe’s land and against the destruction of the Amazon, said during his recent visit to Europe, “Where will the uncontacted Indians go? Without their lands protected, they will die.”

Survival International, the global movement for tribal peoples’ rights, is calling on the Brazilian and Peruvian governments to protect all land inhabited by uncontacted tribes and to honor their promise to improve cross-border coordination to safeguard their welfare.

Survival’s Director Stephen Corry said today, “International borders don’t exist for uncontacted tribes, which is why Peru and Brazil must work together to prevent lives being lost. Throughout history, uncontacted peoples have been destroyed when their land is invaded, and so it’s vital that these Indians’ territory is properly protected. Both governments must act now if their uncontacted citizens are to survive.”