You are here: Home / Archives for Paraguay

The UN’s flagship business initiative is being used as a tool to mask human rights abuses, according to Ayoreo Indians in Paraguay.

Leaders of the tribe, some of whose members are still uncontacted, have written to the UN Global Compact saying they are ‘concerned and frustrated’ by the inclusion in it of a controversial Brazilian ranching company. END_OF_DOCUMENT_TOKEN_TO_BE_REPLACED

Brazilian beef barons whose illegal clearance of land inhabited by uncontacted Indians in Paraguay was spotted by satellites have now been charged with illegal deforestation. 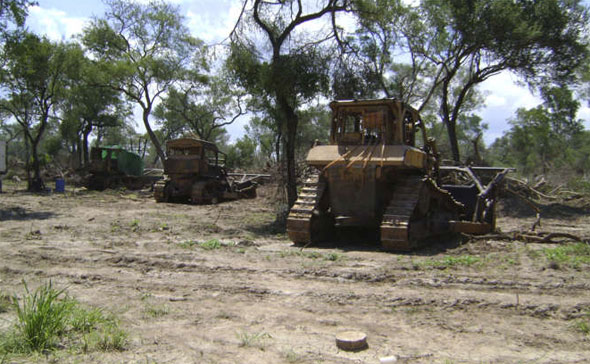 Wealthy landowners in Paraguay have been caught red-handed after newly-released satellite images showed their startling destruction of almost 4,000 hectares of forest – which is inhabited by uncontacted Indians.

The Brazilian-owned companies, River Plate S.A. and BBC S.A, were busted in a secret operation by state and indigenous authorities in the Chaco region of northern Paraguay. END_OF_DOCUMENT_TOKEN_TO_BE_REPLACED