You are here: Home / News / Davi Kopenawa to visit USA 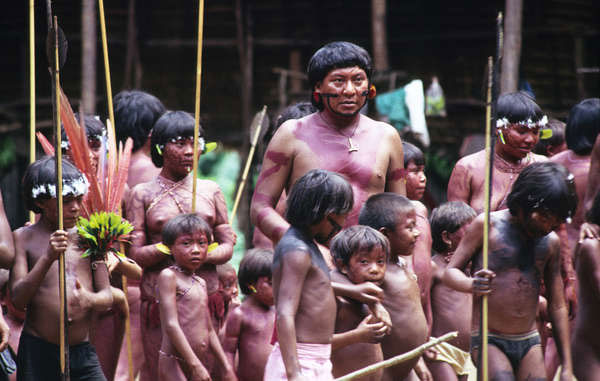 Davi Kopenawa, an Amazonian shaman and spokesman for Brazil’s Yanomami tribe will make a rare visit to California (USA) in April 2014, to talk about the urgent need to safeguard the world’s rainforests for future generations, and his connection with the spirit world.

This is a rare opportunity to listen to Davi Kopenawa’s unique messages to the world from the heart of the Amazon rainforest.

Davi, who has been called the ‘Dalai Lama of the Rainforest’, will be promoting his new book ‘The Falling Sky’. He will give a talk at the Presidio Trust’s ‘Crown Jewel’s’ Exhibit which features images of the Yanomami and their land; a conference at the University of California, Berkeley, honoring the legacy of Nelson Mandela; and other events.

See Davi Kopenawa talk about his book in the video below

Davi has emphasized that indigenous peoples are often the best guardians of their land. He said, ‘You have schools, but we know how to look after the forest. It is very important for the governments of the world to listen to us, the indigenous people who have lived on the planet for thousands of years.’

But illegal mining continues, and a controversial bill currently discussed in Brazil’s parliament could open up Yanomami territory to large-scale mining, which would further devastate the Yanomami’s land and once again introduce dangerous diseases to the isolated tribe. Mining corporations have already filed over 650 requests to mine on Yanomami land.

Davi founded the Yanomami association Hutukara and has received the UN Global 500 award for his contribution to environmental preservation. During his visits abroad, he has spoken at the UN in Geneva and New York, and met with prominent figures such as Al Gore, Prince Charles, and the former UN Secretary General, Javier Pérez de Cuéllar.

Davi will be accompanied by Survival’s Research Director Fiona Watson, who has spent many years campaigning for the rights of tribal peoples in Brazil and Venezuela, and the Bushmen in Botswana, and has known Davi for over two decades. She said today, ‘Davi’s visit to the USA comes at a pivotal time for Brazil’s indigenous peoples as congress and government seek to weaken their hard won rights. As Brazil prepares to host the Soccer World Cup, it is crucial that the American people and supporters around the world rally behind indigenous peoples like Davi in their battle to protect the Amazon rainforest and its peoples.’

The Yanomami are one of the largest relatively isolated tribes in South America, who live in the rainforests and mountains of northern Brazil and southern Venezuela. They number around 35,000 and their combined territory is the largest area of forest under indigenous protection, equivalent to the size of Missouri.